The awards give council the opportunity to give recognition to individuals, organisations and the development community for development work and the conservation of heritage places throughout the city. The awards also provide an opportunity to recognise academic projects completed by students, from all levels of education, which promote/examine the culture and heritage of Ipswich and the Ipswich region.

Objectives of the Awards

The overall objective of the Heritage Awards is to promote excellence in the conservation of heritage places throughout the city and in the design of new development. Emphasis is given to those developments promoting a quality lifestyle for residents, businesses and visitors of the City of Ipswich:

These awards acknowledge the work of organisations and individuals that conserve, restore, reconstruct and adapt existing places so as to retain their cultural significance. All types of projects are eligible including:

Commendation
Awarded to Chris Elliott for the Bowerlea Ensuite Extension. The work in this extension was to ‘match existing’ or create a sympathetic addition in keeping with the original home. Chris is commended for his attention to detail including the hand folded flashing on the roof tiles, roof line pitched to match the existing entry and window bay roof lines and the re-use of original window sashes and custom wood machining to match the window frames.

The interior of the main building had not seen significant works for 30-40 years. Funding for the work was raised through Long Lunch functions, the Old Girl’s Association and the P&F Association. A key focus was to achieve create a fresh and inviting environment at the same time ensuring that the work did not appear new and out of place within the walls of the 125 year old building.

The aim of this award is to encourage and acknowledge maintenance of heritage listed Ipswich properties. There are a large number of well-maintained and well-presented heritage properties in Ipswich, many lovingly cared for by residents as their family home. These properties are a vital aspect of our heritage image. Selection and judging will be by local National Trust members. The place nominated must be deemed a character Place or be in a character zone in the Ipswich Planning Scheme. 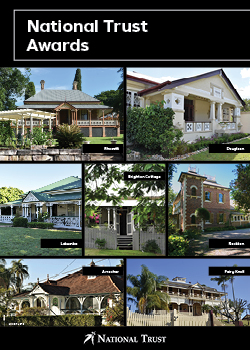 Great Houses of Ipswich Open Days
Twice a year owners of historic Ipswich properties participate in the Great Houses of Ipswich Open Day. Rhossilli, Dougleen and Brighton Cottage were open on 12 May 2018 and Arrochar, Fairy Knoll and Rockton were open on 15 September 2018. The owners of these properites received a certificate in recognition of their participation in this event.

In 2019 the local history component of the awards was posthumously named to honour well known Ipswich historian Robyn Buchanan. All types of projects are eligible including:

Through this publication Kate tells the story of the Old Boys of the Ipswich Grammar School and the contribution they made to World War One. In her own words she wrote ‘I have tried to let the Old Boys tell their own stories, by including letters they wrote home – many of them to our then Headmaster, Mr Richard Kerr’. The majority of these letters have not been previously made available to the public. Snippets from Red Cross Reports, Service Records and recommendations for military awards all make fascinating reading and tell so much about the dedication, bravery and compassion of the Old Boys – traits that still exist in the current body of students.

Silver Award
Awarded to Donald Walker for ‘The Walkers of Aberdare: An Ipswich Mining Family’.

This is a history of the significant contribution that four generations of the Walker family have made to the coal mining industry of Ipswich and Queensland. In 1848 at the age of 17, William George Walker travelled from London aboard the ‘Artemisia’, the first immigrant ship of free settlers despatched to Moreton Bay. William worked in the mines In Ipswich from 1875 until 1884 when he opened his own mine with the assistance of his sons. The book is a history of the Walker family and of their mining operations up to 1978 when the Walker family sold their business.

Commendation
Awarded to Rick Thorn for ‘George Thorn: The father of Ipswich’.

This is a biography in narrative form of George Thorn, tracing his remarkable life from humble beginnings as an English Agricultural Labourer, to becoming, arguably, Ipswich’s most memorable Founding Father. For 37 years from 1839 till his death in 1876, George and this town are indelibly linked. Originally the Overseer of Government Herds at the tiny isolated Agricultural Station at Limestone, George’s prosperity and influence grew in parallel with the ‘village’ which became Ipswich.

Commendation
Awarded to Susanne Ruijs for ‘Rosewood Then & Now: a story through time’.

This book describes how the determination and will of the early settlers survived the hardship of their new life starting, not only in a new country, and where for many a different language was spoken, but in an area that was undeveloped, strange, hostile and with nothing to fall back on. The story of Rosewood tells how a town developed and why Rosewood is what it is, a lovely town with a lot of people determined to make it into a lively community. It also demonstrates the commitment of people who, despite hardship and sacrifice, lay the foundation of Rosewood of today.

The Burley Griffin Design Awards acknowledge innovative design and design methods across all forms of development. All types of projects are eligible including:

Awards will be selected from all categories for students from prep to university, including early childhood and lower primary, middle school (Grades 5-9), upper high school (Grades 10-12) and tertiary (TAFE and university) students. The awards are presented to the student or group of students who produce a project of scholastic excellence that is innovative and located within the City of Ipswich and rural areas. Due consideration will be given to the age of the applicant.

Awards in the form of certificates are presented on the recommendation of the judging panel to the person/s principally responsible for the project/works.

Ipswich City Council offers $2000 to the school/institution whose student/s are presented with the Overall Student Award. In addition, the winners of the Overall Award will receive an award trophy and will retain the perpetual trophy for twelve months. All types of projects are eligible including:

History of the Awards

The Heritage and Design Awards were adopted in 1992 to publicly recognise, promote and reward excellence in the design and construction of new developments and the conservation of heritage places throughout the City of Ipswich.

An Enviroplan Environment Award category was incorporated into the Awards in 1997. In 1999, due to the extremely positive response from Ipswich schools, council initiated a perpetual trophy specifically targeted at schools to promote academic excellence and school pride in history, development and environment of the City of Ipswich. In 2017 a Sustainability category was incorporated into the awards program.

The awards program was revisited and in 2019 came full circle and made its return to the Heritage and Design Awards.